Megascale Engineering of the Transhumanists

The Lifeboat Foundation has published a list of the Top Ten Transhuman Technologies. It is a most interesting list. It postulates that if humans are able to think of something then, it is a matter of time before the idea is realised.

“Transhumanists tend to take a longer-than-average view of technological progress, looking not just five or ten years into the future but twenty years, thirty years, and beyond. We realize that the longer you look forward, the more uncertain the predictions get, but one thing is quite certain: if a technology is physically possible and obviously useful, human (or transhuman!) ingenuity will see to it that it gets built eventually. As we gain ever greater control over the atomic structure of matter, our technological goals become increasingly ambitious, and their payoffs more and more generous.”

Making up the top ten are Cryonics, Gene Therapy, Self Replicating Machines, Molecular Manufacturing and so on. It is as you may imagine mostly interesting stuff, and at number three sits ‘Megascale Engineering’. YES. 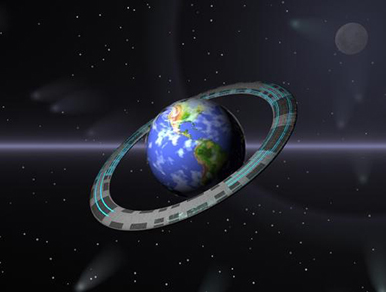 A world of enormous planet dwarfing structures supplying infrastructure to the exponential growth of the human and transhuman peoples. Obviously, the construction of these behemoths would require more than man power however we are told that, with the help of some good ol’ self-replicating robots

“the production of such large structures could be done largely by autonomous drones, with intelligent agents only managing the highest top-level functions and architecture. Considering that mankind’s long-term future is in space, and that space right now is pretty devoid of any structure useful or habitable to humans, we have a lot of work to do, and if you can make the projects megascale, why not?”

Indeed, why not? Tow of the references mentioned in particular, caught our eye - Globus Cassus and the Dyson Spheres. Globus Cassus - literally Hollow Sphere - is a proposal by Christian Waldvogel and formed a part of the Swiss Pavilion at the 1994 Venice Biennale. 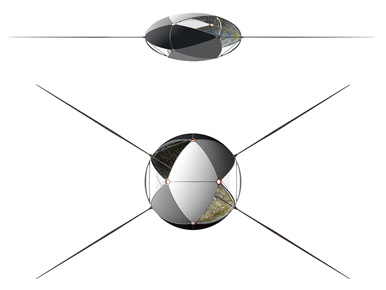 It takes the form of a compressed icosahedron that surrounds the point where the earth once was. The inside of the sphere forms the habitation, with two large continents facing each other across the empty centre.

The structure is made by gradually excavating the earth’s crust, mantle and core, which are transported outwards via four symmetrically placed space elevators. The gradual excavation of the earth results in the melting of the ice caps, all water vapourises and condences on the inner surface of the sphere forming rivers and lakes (Don’t ask, okay. It just does.) leaving the inner surface of the sphere fit for human habitation. The process leaves earth as the second largest planet in the solar system.

The Dyson Sphere (although proposed 35 years earlier) steps it up a notch to propose a network of solar powered satellites surrounding a star, capturing its entire energy output.

While Dyson only ever speculated a ring or a swarm of such satellites, others have extended the idea, speculating that such a network would eventually become so dense that it became a solid shell completely encompassing the star.

Dyson himself was a fascinating dude. Aside from being an accomplished physicist, aside from the Dyson Sphere, he also speculated on a number of ways in which space may be occupied or made habitable. The Dyson Tree, where a genetically modified plant could be implanted on a comet, potentially producing a breathable atmosphere in the hollows of its surface being one example.