A widespread taste for pornography means that nature is alerting us to some threat of extinction.

SC buddy, Anthony Gill has a new website up and running for his office, Gill Architects are producing some really great work including a number of residential projects and restaurant fitouts. I particularly like the front elevation of their Surry Hills project:

Also, check out their Paddington House at Australian Design Review.

Steve Jobs presenting plans for a new 12,000 person Apple HQ to the Cupertino City Council. Primarily interesting mainly to see Jobs transplanted off the keynote stage and into the democratic planning process we all have to wrestle our way through. I like the part where one councillor asks Steve what benefit the project will have for the wider city, and Steve’s response is to threaten moving Apple out of town and taking its Cupertino-sustaining tax dollars with it. Then councillor in reply begs Steve for free wifi. Weird. The building itself looks like any other Foster and Partners project, perhaps only bigger. Which is something? Gelatobaby notes how soft the councillors are on Jobs, as well as pointing out that Jobs had given almost the same presentation 5 years ago to the same fawning councillors. Also, as Matt points out: 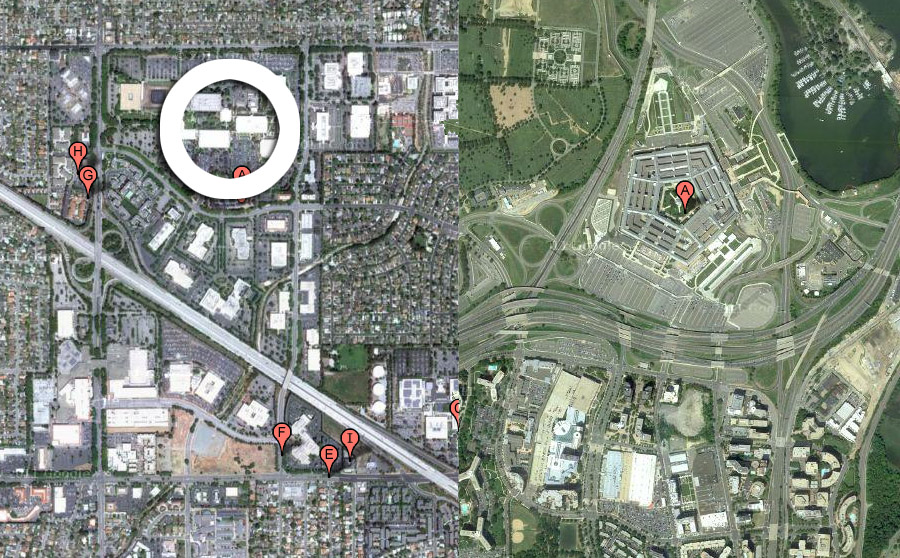 Image: Apple’s proposed Campus and the Pentagon. To scale as far as can be known from Google Maps.

Who New, an exhibition at UTS of 12 architecture offices that have graduated out of the offices of Herzog de Meuron, Foster + Partners, and Renzo Piano Building Workshop. Curated by Sydney architects Silvester Fuller.

Urban Islands is on again at Cockatoo Island. Read Geoff’s write up of the 2009 Studio at BLDGBLOG. Inhabitat has pictures of Ney Yorks Highline second stage.

Prisoners in China’s Jixi labour camp have been gold farming in MMORPGs to earn online credit/gold/armour/etc that their guards would then trade for real money, the Guardian tells us. The article goes on to say that there are thought to be 100,000 full time gold farmers in China.

Olafur Eliasson’s wonderful rainbow room, or, ‘Your Rainbow Panorama’ at the ARos in Aarhus, Denmark is complete.

And secondly, far more crassly, this misogynistic advertisement for an house on the Goldcoast, where a woman in her underware, tied to a chair when asked by emergency services where she is, describes her surroundings in real estate jargon, “its a three level home, contemporary design, open plan living, gourmet kitchen” before being rescued from her attackers by a swat team. This is the endpoint of real estate: (NSFW)