[Image: If We Don’t Remember Me Title: James, Ellroy, ‘Bloods a Rover’]

Okay. Let’s see if I can get this thing started up again. A couple of things by way of housekeeping. This blog has been quite for the last six months or so while I have restructured the office and made some changes to how things are running here. More on that in the near future hopefully. For the moment, I am going to do a post-a-week aggregating links and things, many of which have been sitting starred in google reader for half a year waiting for some love, so a lot of these links may be old in internet years, but will be no less interesting of course.

72 Hour Melbourne is a design competition in which ten teams will have three days (72hrs!) to design and construct a temporary thing in Melbourne’s Docklands. Put together OUTR. Speaking of affirmative action, I sat in on reviews for Rory Hyde’s Unsolicited Architecture studio at Sydney University a couple of weeks back. There were some great projects, the best of which were the guerilla style, micro-interventions by a few of the teams, showing a bit of wit and some balls going a long way. There were a couple of great videos by some of the teams, so I will track them down and post them when I can.

Rory also gave a lecture at the University of Sydney where he laid out the structure for his research into potential futures for design practice, expanding on his blog post of the same title (which if you have not read, do so now) and presented the preliminary results of interviews with people practicing design thinking outside of the traditional model of architectural practice. People like as Marcus Westbury of Renew Newcastle fame, Chilean architect Alejandro Aravena, and Steve Ashton the less visible director of ARM and the designer of their contracts. Fascinating stuff and already generating a great deal of discussion.

A proposal to crowdfund putting the monolith from 2001:A Space Odyssey on the moon using Kickstarter as a funding model. Related—I wrote a short article on the moon and the monolith for Volume Mag’s Moon issue which I probably should post up here at some point.

Stuart Harrison and Simon Knott of RRR’s The Architects, have a new television series starting up. ‘Good, Bad, or Ugly’ will be eight 5-10 minute episodes that will air during Art Nation on ABC1, Tuesdays at 9:30pm. Otherwise they will be available to view on the ABC’s iView service. I have been a long time supporter of RRR’s The Architects, and have high hopes for this venture into moving pictures.

Paul Keating has resigned from his position as Chair of the Barangaroo Design Excellence Panel leading to the newly elected NSW State Government to start talking about potential revisions to the controversial harbourside project. Keating stepped down after being asked not to continue making derogatory remarks about members of the local community. He had called the 10,000 signatories of a petition calling for an inquiry into the project “sandal-wearing, muesli-chewing, bike-riding pedestrians”. If only Sydney had so many cyclists! Meanwhile, Butterpaper notes that over on the Barangaroo webpage, this news has gone unnoticed, while their news section is promoting the projects appearance on ‘The Biggest Loser’. Prescient.

Buddies Lacoste+Stevenson have staged an exhibition for their winning scheme for the UTS Tower podium. It is up at the UTS Kensington St Warehouse until May 16th. Go check it out. It is a great project and UTS needs to man up and get the project up and running.

I like this drawing of future gridlock by Brandon Graham from his upcoming comic Multiple Warheads: 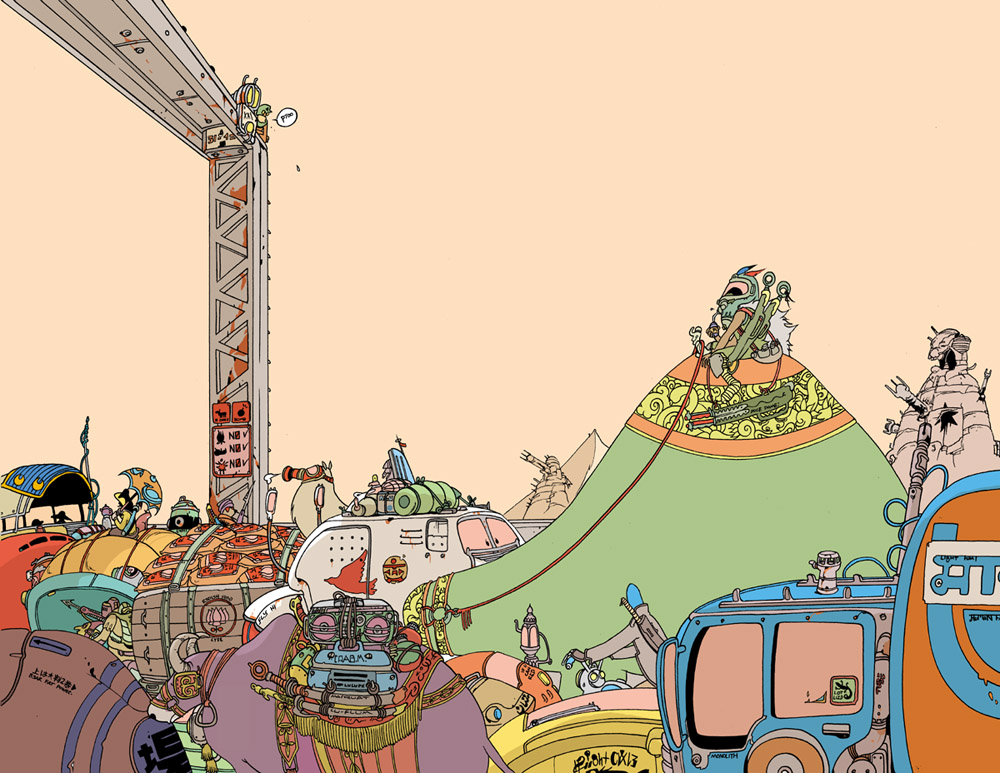 Bin Laden hideout round up: Sam Jacobs finds the ‘mansion’ moments later in the Google Sketchup Warehouse, the Washington Post has a more detailed model, complete with highlighted overlays of kill zones, and later the architect of the building, named as ‘Bill’, learns via Archinect, that a concept design of his had been used by concrete contractors in Islamabad to hide the world’s most wanted man.

Inception remade in the finder window.