A short while back, Alex at Pruned pinged us with this meme: Take the closest book to hand. Open it at page 123, find the fifth sentence, post the next three sentences and tag another five people.

While the fibbonaci-ness of the request was immediately seductive, I have been waiting for the appropriate time where the closest book to hand is not (a) a comic book, or (b) an Ikea catalogue.

And so, right now, conveniently, the book at hand is “Hyper-Border; The Contemporary US Mexico Border and Its Future 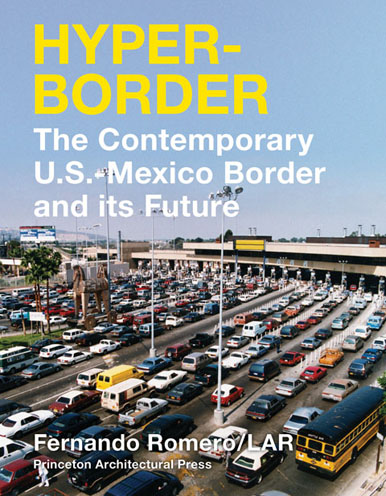 I have had to cheat a little, as page 123 contains an image of imaginary Mexican terrorists in the year 2011 scaling the US-Mexico border on their way to infiltrate a nuclear power plant…

On the next page however we return to the present day and learn that:

“This DHS program has two goals: to secure the northern and southern borders and increase immigration enforcement efforts in the country’s interior by 2010. The former effort calls for the doubling border security agents to over 18,000 by 2008 and increasing technology through a fence system known as SBInet, consisting of more sensors, cameras, infrastructure, and communications technology. The latter streamlines and shortens the detention-and-removal processing of illegal migrants.”

The book is highly recommended, not only because of its excellent use of orange, but for its exhaustive coverage of its subject. Living in Australia, where the only border we encounter is primarily used for leisure, borders are truly exotic things. I wonder what Australia would be like if Federation never occurred. In NSW we often fondly refer to our Victorian friends as Mexicans, but what if they were another country? And - holy shit - what if Queensland was another country? You can be sure we would be protecting that border pretty rigourously.

So, anyway, to pass the tag along. How about Decanted, City of Sound, Life Without Buildings, Eikongraphia, The Art Life?